The newest faces among South Korean influencers are no longer the usual young celebrities in their 20s. Instead, people in the entertainment industry and on social media are becoming interested in a different generation: the older generation.
Influencers are people who gain popularity through their social power. They use social media to create interest in something — usually products f﻿﻿﻿﻿or sale.
In the past, older women were mostly unseen in South Korean entertainment. The industry held onto firm, traditional female parts in films and on television. Older women were often only seen playing loving mothers.
But recently, older women are front and center in advertising and entertainment series.
A leader in the movement is Oscar winner Youn Yuh-jung. The 74-year-old actor starred in the film "Minari." The film is about a Korean-American family that moves to a rural part of the United States to start a farm.
In a recent advertising campaign, Youn is the face of a South Korean beer company. The ads for Oriental Brewery make note of the unusualness of its spokesperson. Youn says, "For someone like me to be on a beer ad, the world has gotten so much better."
With a beer in her hand, Youn says she makes friends by being her true self. She suggests that the beer helps people socialize better.
South Korean producer Kim Sehee said Youn's Oscar win earlier this year influenced his entertainment series, "Wassup K-Grandma."
Kim said South Korean young people have a new interest in the older generation. They created a new word "harmaenial." It is a combination of the South Korean word "harmoni," or grandmother, and the English word "millennial," used to describe the younger generation.
Kim said the series was one of the first Korean shows to have grandmothers as the main characters. 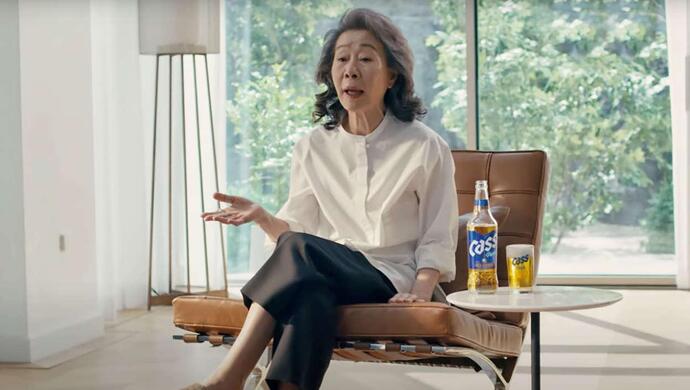 Park Makrye is a popular South Korean media maker on YouTube. She is 74 years old. Park's YouTube channel, "Korea Grandma," has over 1.32 million followers.
Park's success has helped others follow. Ninety-year-old Jang Myung-sook offers fans clothing and lifestyle advice on her channel, called "Milanonna." Another popular YouTube channel is "G-gourmet." It follows a 76-year-old Korean woman's "single life."
Park said the country's opinions on women and age have been changing quickly. She told The Associated Press, "Back in the days, people thought women were supposed to be only housewives cooking at home but that's once upon a time."
She said, "I would like to tell grandmothers to try everything they want to do and not be concerned with their age."
She added, "For young people...You'll be OK as long as you are healthy."
I'm Gregory Stachel.